Following Twitter references to ouzo and #ouzo there is a very specific group of people with old bad memories of ugly hangovers associated to ouzo drinking.   This is commonly the result of improvised cocktails or slammer abuse but more commonly I would guess due to low grade pseudo (non distilled) ouzo or non A brand ouzo.

Here are some things to look out for:

2. It also goes milky white  in a balanced way when you add water.

3. The aroma is mild, it shouldn’t blow your nose away!

4. A whiff of aniseed, phinocio, gum, cinamon, kakoule and even chamomile are possible ideas as you bring it to your nose .

5. If you know your wines, good ouzo is semi dry.

6. The after taste on a good ouzo is smooth.

The two brands used as a reference point for most experts are Plomari as indicative of a common (No1 brand worldwide) ouzo and Adolo which is the ultimate in ouzo experience, by triple distillation in very limited production runs.

All this doesn’t mean that a local ouzo might not be great, just that it is difficult to be sure what is actually in it.   And how you will wake up the next day.   As emphasized in ouzo etiquette guidelines, this is generally a social drink enjoyed with company and food.

Here is the short version as I understand it: put the water first and then the ice.  Depending on how much alcohol the ouzo has it will react differently to extreme cooling.  Don’t overdo it cooling this drink because you then kill the aroma.

And here is the long version:

“Anethole is a rather nonpolar compound. The solubility of the ancthole contained in the Greek liqueur Ouzo is in a range in which the compound crystallizes out in the deep cold whereas it is still soluble in the beverage at room temperature. This effect can easily be observed in a Greek restaurant. When Ouzo is served as a well-chilled aperitif it appears cloudy due to precipitated ancthole crystals. On standing and warming, the cloudiness disappears by dissolution of ancthole in the aqueous ethanoL There is no other

flavour component in Ouzo which undergoes this change. Therefore, it can be used for a simple selective separation of ancthole just by filtration of the cold liqueur. However, it should be kept in mind that ancthole has a rather low melting point of 22 °C\ This has to be taken into consideration during any separation operations. All equipment used for filtration h3s to be precooled to avoid loss of ancthole by liquefaction.

It is not to recommend to cool the liqueur still more than described here because then water ice also begins to crystallize. If you cool several brands of Ouzo you will find that the degree of crystallization of ancthole is different, which gives a hint about its varying content in the liqueur.

Λ 500 ml volume of Greek liqueur Ouzois allowed to cool in a deep freezer at -20 °C overnight. The viscosity of the solution increases. Anethole crystallizes in the form of colourless leaflets, A sintered glass filter funnel is precooled in the same freezer and used for the filtration operation. The Ouzo is filtered by suction, which requires 30 min because the glass filter easily tends to become blocked by the ancthole crystals. To avoid this, it is to recommended to scrape of] the material from the filler surface occasionally by means of a pre-eoolcd spatula. During filtration, the temperature at the funnel should not rise above -12 °t.   Finally, a colourless crystalline mass (300 mg) is scraped out of the sintered glass filler funnel, put into a glass vial and immediately evacuated with an oil pump at 20 Pa and 15 °C to remove traces of water and ethanol Colourless crystals of pure anethole (150 mg) remain in the vial, which, depending on the storage temperature, can be kept as a solid or a liquid.” 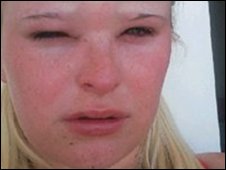 (Traditional song entitled “ouzo” by Babis Gkoles and his orchestra as shown on Greek national television.)

Even before drinking the stuff you will be hard pressed to find anything to rhyme with this word!   Making a song about it in any other language other than Greek will be a challenge unless you are from Japan.  The special rhyming website offers the following, not very useful options:

Suzo Suzo International was founded in 1955 in Rotterdam, The Netherlands and supplies components and solutions for the amusement, gaming, casino, and vending industries.n. Wikipedia suggests Suzo.

Scientists studying the cloudy emulsions produced by anise-flavored liquors such as Ouzo have discovered new molecular insights into their formation, findings that could lead to the design of better commercial emulsions used in making pharmaceuticals, food products, cosmetics and other materials.

Although transparent when bottled, Ouzo, Pastis, Pernod, and other popular anise-flavored alcoholic beverages form milky-white emulsions when diluted with water prior to drinking, a phenomenon commonly known as the “Ouzo effect.” These emulsions occur spontaneously and are stable for weeks and even months, a feature that is attractive to industry. However, scientists are unclear how these mixtures form and stabilize.

In the new study, Erik van der Linden and colleagues measured the stability of various emulsions prepared from commercial Pernod and compared the results to theoretical predictions of their formation. The scientists found that their experimental observations were often opposite the predicted behavior of the emulsions in the presence of various concentrations of oil, water, and alcohol components.

“More knowledge of the parameters that determine the stability of these emulsions, besides interfacial tension, solubility, and density difference, might lead to better control of theemulsification process,” the study states.

Note that when adding water and ice to ouzo, it is customary to add the water first.

Click here for the source of the original article.

A few things you need to know about how to enjoy ouzo from this great article:

“Here is some ouzo etiquette you may want to keep in mind if visiting the beautiful country of Greece:

A great article we found here summarises a lot of important main points about ouzo.

“In Greece, ouzo is not just a drink but is way of life; an anise flavored alcoholic aperitif that all Greeks enjoy.

As real scotch is made only in Scotland, as real champagne is the sparkling wine that comes only from certain regions of France, so ouzo is made only in Greece; and no drink made outside of Greece and Cyprus is permitted to be called ouzo.

Though the word ouzo is derived from the Turkish ‘uzum’, which means grapes, this is not a grape based drink. The thing to watch out for with ouzo is that it has a kick like a mule, but one that is not instantly obvious.

Its alcohol content is not all that high, but it is the sugar content of the drink that can be misleading. So at first you may think that the drink is not hitting you but it does later because the alcohol takes time to get absorbed into the blood stream.

Does ouzo contain opium and if so, which brands have the most?  If you Google search “Coke Arab rumors” the top result you get is in fact from the Coca Cola company!  That’s how seriously they take the problem of misinformation.   It has often been quoted recently that this is in fact the wrong type of response, especially in this article from the Economist.   The gist of the argument is that repeating the rumor reinforces it and that companies should concentrate on putting out a steady stream of positive news instead.

This of course, based on recent work by Derek Rucker and David Dubois, of the Kellogg School of Management, and Zakary Tormala, of Stanford business school, has an element of truth.  However it would also depend on the volume of interest and the reasons the rumors is circulating in the first place.  So the initial question of “does ouzo contain opium?” perhaps should be redefined as “why are you asking?”  It is more than possible that a number of people are looking for opium in ouzo as a positive thing!  Maybe ouzo brands should reinforce the rumors to increase sales!!

The analogy with Coke is not a random one of course.   According to most sources, Coca Cola did in fact contain cocaine in earlier versions of the recipe.  So maybe Coke and ouzo brands should collaborate on the matter because just imagine what would happen if you mix the (supposed) cocaine in Coke with the (imagined) opium in ouzo!

A more matter of fact analysis is in the page we dedicated to the matter of opium in ouzo here.

1oz of ouzo contains 103 calories, 0 fat, 11g of carbohydrates and 0 protein.  In the world famous Mediterranean diet, a glass of wine

accompanying each meal of greek food has set researchers looking for the exact mechanisms of this healthy secret.   Not enough research has taken place however concerning the traditional way to enjoy ouzo which has every sign of being an equally healthy choice, if not more so.

Many claim that it in fact developed from the times of hardship when there just wasn’t enough to go around.   So Greeks sipped their ouzo with “mezedes”, small quantities of sardines or other fish rich in Omega 3, cheese and fresh vegetables like cucumber.  It goes a long way in pre empting the recent “slow eating” movement and many other developments in our knowledge of healthy eating.   Ouzo just doesn’t inspire fast consumption and begs to be escorted by this sort of food and…good company!